Well, we made it to Zagreb, despite the snow! Landed at Zagreb International and proceeded to put the bikes back together. Unfortuantley, Rebecca’s bike had been damaged in transit (bent rear mech hanger) but we managed to adjust the cables and ride it to a Zagreb bike shop to get it fixed. Whilst waiting in the airport we met Ivan, who kindly invited us to stay once we’d pedaled the 20kms into town. The first ride was a snowy affair – everything on the ground was white and it was impossible to spot where the cycle tracks were but luckily a local cyclist pulled alongside and lead us into town. Thank you Mr!

After 2 days in Zagreb waiting for the snow to melt we stumbled across the Bicycle Information Centre, where a very helpful Darinka told us about the cycle route along the River Sava, so day 1 we headed South East (we were planning to head North East). In a couple of days we should connect up with the Eurovelo 6 cycle route in Osijek, we’ll take a 3h train to get there from Novska where the Sava route ends. 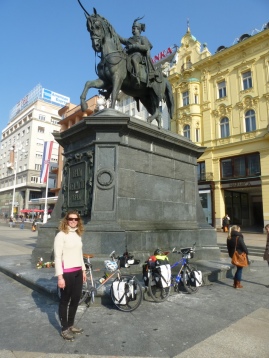 Zagreb to Siska, is 90kms which makes for an epic first propper day in the saddle with two 45kg bikes! After 20kms of bouncing up and down kerbs and potholes one of Rebecca’s front racks decided that it would like a closer inspection of the front wheel and jamed itself in the spokes bending right around the fork, fortunately – no other major damage! With gaffa tape and cable ties we contiune….. we hope to get replacment (better quality) racks shipped to somewhere in Romania or Bulgaria.

We’d heard about dogs and what to do if you’re chased (squirt water at ’em apparently) but we didn’t really expect to be chased by a pack of dogs! Twice! On the first day! (Didn’t get chance to squirt em with water, even though we were both tired, it’s amazing how fast you can pedal when there is a pack of dogs giving chase) I wonder what the locals at the side of the road thought as two heavilly laden cycle tourists race through the village, with the local dog population following chasing our ankles?!