Leaving behind the statues of Nemrut-Dagi and not wanting to re-cross the mountain range we hopped on a coach and returned north, back to Malatya where we’d stayed a few days earlier. After a nights rest we were back on the bikes and continuing north, following a river and railway, so it had to be flat and easy going… right? But that afternoon, with a strong headwind building, progress was painfully slow. Unfortunately the immediate landscape offered little in the way of shelter or hiding spots for the nights camp, however we did find some flat ground on a farm track, and it was decided that a night under the tarp would be the best option…. after a restless night being bitten by bugs, the jury is still out! 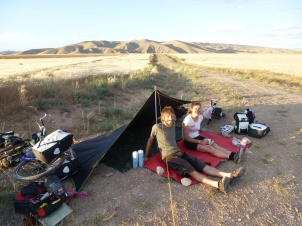 Leaving the valley floor in search of a quieter road we went “off the map” and after taking in more hills than we’d intended we called it a day in Hekimhan. Hoping to find somewhere to camp, we cycled into the centre and picked a cafe for a cup of cay whilst waiting for a plan to develop. In broken English, the cafe owner suggested “no camping” but that we should stay in the “Teacher House”, we were confused but he instructed a nephew to show us the way. “Teacher House” turned out to be dormitory accommodation for government workers…. which is also open to the public if they have room…. at a bargain price too! Random places to sleep #1

The following day we carried on over the hills and had stopped for lunch when we spotted storm clouds looming over the horizon…. from our intended direction. We packed away our lunch and waited for the weather to develop. The wind built, the sky darkened and the rain came, big time. As we sheltered in the (all metal) bus stop, the mother of all thunderstorms developed. A motorbike stopped and two guys in short sleeves shared the shelter with us before realising that the nearby electricity substation was open… they went inside. We’d already heard the breakers trip out a number of times…. there was no way we were going in, not with the Turkish electrics we’ve seen so far! They came out a couple of times to beckon us in…. No way!! With a groundsheet covering us we stayed mostly dry. Of course we should’ve laid down flat in a ditch….  but this was real wet rain! After the storm had passed we made it to the next town but Baptiste wasn’t feeling 100% so we went to the cafe and asked if there was anywhere to camp (answer = no). A few more cays later and the cafe owner said we could sleep on the settees! Result! Random places to sleep #2!

We left the main road and took a short cut over the hills, the road was not paved but had a reasonable surface with only one ford to cross. (After 2 attempts, Tim can confirm that it wasn’t rideable). We crossed the summit and made camp at a suitably sheltered and well hidden spot with views across the valley, beautiful. 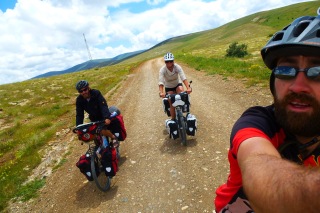 It should have been a short easy ride downhill in to Divirgi the following morning, but the road was being replaced/upgraded (as we have found across much of Turkey) which left a rutted quarry track in it’s place, so not easy at all really. With nowhere obvious to camp we checked into the cheapest hotel that had a real toilet!! After seeing the sights (more Mosques and this time a Mosque hospital too) we slept well and had a leisurely morning fetling bicycles and getting the tent zips re-sewn by a nice old guy in a little shop with an ancient sawing machine and a big smile! 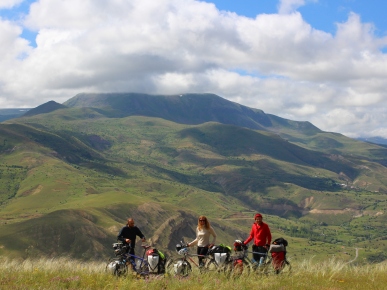 The next destination was Erzurum where Baptiste would rendezvous with his new riding partner, we were ahead of schedule so we took our time, taking the scenic route and free-camping for five days straight. With pretty much a mountain pass each day, and typically 900m of climbing, its not surprising our average daily distance dropped to 40km! During this time Baptiste retook the downhill speed record at 76km/h (coasting), Tim gave chase but with worn rear wheel bearings/hub couldn’t match it. Rebecca stuck to a “sensible” 54km/h…. these beasts of bikes can get a bit wobbly! Swimming and washing in the rivers meant we didn’t get too smelly and we even managed to boil the kettle on a tripod over the camp fire! In Erzincan we made random place to sleep #3 which was a city park picnic shelter whilst another mega thunderstorm rolled through! We then took the “Express” train to Erzurum, (to avoid big roads and suspect territories) but for most of the journey were shadowed by 2 armoured cars.. slightly disconcerting!

In Erzurum we rested, relaxed and got Tim’s sunglasses repaired…. we took them into an opticians then got lead by the hand to the top floor of an office block above a market where there was a friendly chubby guy who performed a miracle and reattached the arm…. maybe Oakley should hire him?

From Erzurum we pedaled onto Tortem Lake as a four, where random place to sleep #4 occurred; the decking/veranda outside that evening’s fish restaurant (with permission of course!) The waterfall was pretty epic but now shares it’s feed with a hydro-electric station so it must have been even more impressive before!

After the waterfall we said goodbye to Baptiste and Manou – to meet the dates on their visas they had to take a direct route to the border. We haven’t got our visas yet, so can be more flexible, but will have to spend time waiting in Cities as we collect them en-route. We took a diversion to Yusefeli to spend a day white water rafting 15km (!) along part of the Çoruh River. Rebecca fell out twice but can you actually see Tim in the photo below? 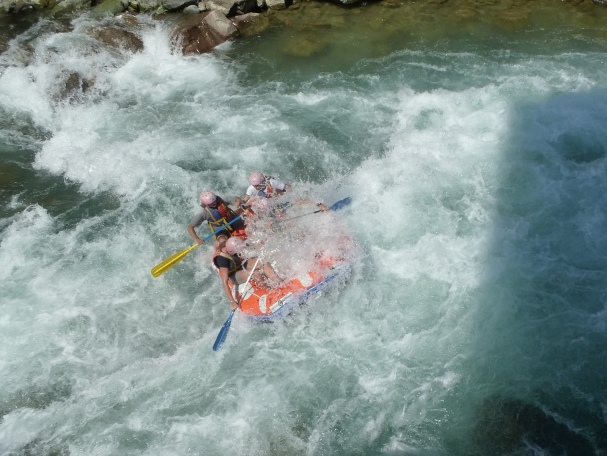 In the surrounding valleys they are currently building 13 giant hyrdo-electric dams which, amongst other things will sadly bring an end to the white water rafting. The plan also seems to include the resettlement of the entire town…….We discovered that the road towards Artvin (site of another dam) was now tunneled into the mountain and full of construction traffic so we backtracked and continued east along another route, but still came across more dams under construction, with a road diversion adding in a bonus 500m climb!

We thought we’d found a perfect spot for that nights camping; asked permission from a local, tick; flat short grass, tick; river for washing, tick; good shade in an orchard under a ruined castle; tick.  But at 2:30am we get woken up by something shaking the tent, we thought a bird had flown in and got stuck.. then someone said “hello”!…Uh oh! Err.. “hello”, “we’re English what do you want?”. He wasn’t going away so the only thing to do was nominate Tim to investigate. In his underpants, Tim got out to find the local from earlier on…. He seemed to be inviting us for tea, whisky or water, “no thanks mate, it’s the middle of the night, not surprisingly, we were asleep”. Fortunately, one of our five Turkish words we’ve mastered is “Gule Gule” (goodbye) so Tim said that a few times and shook his hand; he eventually got the message. With a Turkish kiss, (head-butt on both cheeks) he went off again, maybe he was drunk? We fully zipped the tent back up and stayed on guard for a while (with laser/LED torch in hand to blind any invaders!) before eventually falling back to sleep.

But it continued…..in the morning just as we were finishing breakfast, a farmer came along and indicated that he was about to irrigate the orchard (we thought it was abandoned). With shovel in hand he then broke the wall of the irrigation channel just above our camp spot! With the water running across the field and rapidly approaching our tent we packed up as quickly as we could, whilst the farmer sat on one of our camping stools and watched! He was friendly but indicated we needed to hurry and then wanted to keep the stool! With only minutes to spare before getting our feet wet we left the orchard and rode off, not even having chance to get changed into our riding gear! Maybe it wasn’t such a good camp after all!!

With the strangeness of the previous nights camp behind us we continued heading north-east towards the Georgian border but made sure that our future camping spots were more hidden away. The scenery changed from dry steep valleys to green rolling hills, and we even celebrated Tim’s birthday by using matches for candles on the yummiest looking cake Rebecca could find.

The final summit before the border was our highest yet at 2550m. Turkey has been good hill training, which we needed, as in Tibet we’ll reach double that altitude, at the start of the trip in Romania, we struggled with 500m hills! 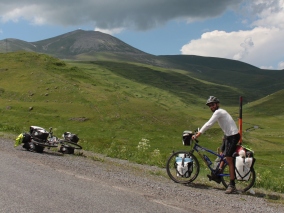