As Virgin Atlantic flight VS251 from Shanghai touched down at London Heathrow, we both knew that there was less than a days worth of pedalling to do before our trip would be really over. It was a time of mixed emotions, sad that our trip was very nearly over, happy that we would reunited with friends and family, relieved to be avoiding horrendous weather but nervous about our reintegration back into society.

Our biggest navigational challenge was getting out of Heathrow, it was as though we’d been kidnapped, blindfolded and dumped in the middle of an airport, we knew we were at Heathrow but where in it’s 3000 acres were we? Unfortunately we didn’t have any maps so the only solution was to follow bus #3 which we’d been told went past our overnight hotel.  Cycling away from Heathrow sounds like a ridiculous idea but it was actually a pleasant ride. The following day we used a short road section before joining the Grand Union Canal, using the towpath and a cycleway for most of the day, all the way to Redbourn. We even found a pub for a lunchtime Pie & Pint. Eight months is a long time to be away from Cider (Rebecca) and Bitter (Tim), they still tasted just as we remembered. Heaven!

As we cycled towards Redbourn we retraced some of our tracks from the first day of our trip, knowing that the last time we passed this field, this tree, that house, we were about to set off on the biggest trip of our lives. And now with every pedal stroke we passed these landmarks once again and rolled closer towards the end of our trip. Arriving at Rebecca’s parents, it was so lovely to see their friendly faces once again, with hugs and kisses it was relief all round to ‘have made it’!

End of trip and still smiling!

After spending many hours in the saddle, imagining what it would be like to be at home, the time had come to be reunited with our families and how wonderful it was! With so much chatter and excitement, the quiet remoteness of the Tibetan Plateau could not have been further away. We spent a week relaxing, acclimatising and visiting friends, then it was a bike-train-bike ride North to our own home village. We were greeted by Tim’s parents with relieved faces (both sides), more hugs and kisses, and it was time for a second homecoming! As the English weather turned to winter, we gazed out of the windows, relieved to be out of the weather but sad that that the adventure was over. Now that the bikes, the gear and ourselves were back where we had started, we really had finished the ride.

We couldn’t have done the trip without the support of our families, so a big thanks to them and also to our friends who assisted us in so many ways; advice, help, European parts deliveries plus moral support on email and via Facebook. We were fortunate to meet many friendly local people along our trip, learn about their cultures and experience their way of life. We also met many other cyclists and will hopefully meet some of them again one day! Some of them are still going, so good luck to those still out there and here are links to some of their blogs:

Baptiste – our riding partner for most of Turkey

Frank- doing a ‘lap’ to start his retirement

V and J – we bumped into this couple in Turkey

Anina and Paul  – on honeymoon to New Zealand

Raz.. now cycling after after walking to Istanbul!

Pol – our ‘floormate’ in Baku

Nuno and Joana – for the Karakoram Highway

Ollie and Anna – cycling away from New Zealand

Daniel – best beard of the trip!

So that’s us signing off, apart from the final video of our ride across China, which will hopefully get posted as soon as we get round to it (!) Thanks for reading!

Chengdu is famous for its Pandas so it was a compulsory visit to the breeding centre! So cute!

The Panda centre was also home to Red Pandas (think fox-cat mongrel with a giant bushy tail… so cute) and some Black Swans.

Leshans Giant Buddah is carved into the cliff. At 71m tall, it is massive. Tim stands by one of it’s feet.

Sometimes, some of the old stuff in China is original! This bridge in an old fishing town is gorgeous! 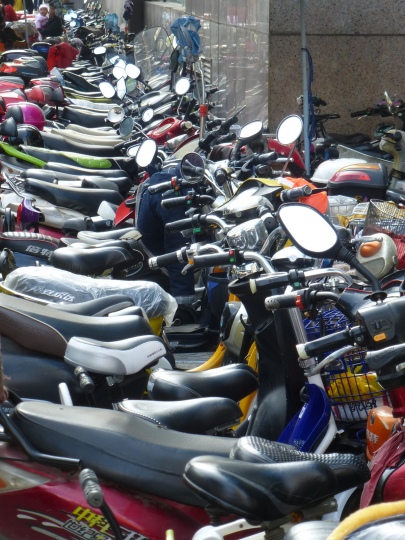 Very few bicycles to be seen, the cycle lanes are full of electric scooters! 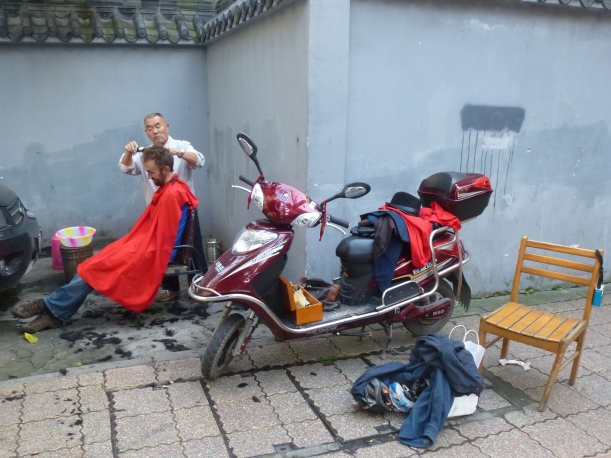 A street barber gives Tim a much needed trim. Not bad for one pound! The scooter also transported the waiting chair!

The Terracotta Army still stand waiting in their thousands.

In Beijing, friend of a friend Laifang (right) hosted us and friend Gareth (left) flew out to join the holiday.

The Great Wall without the crowds! Hiking gear required! 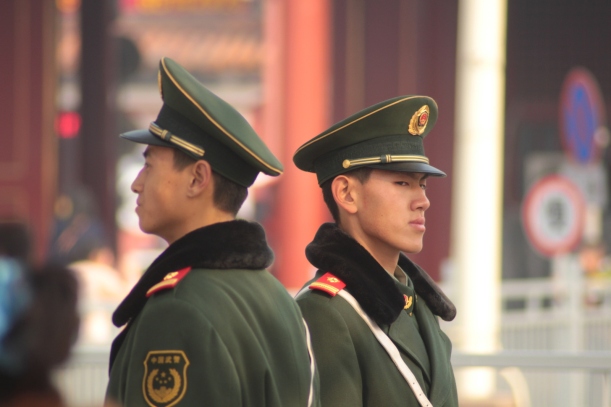 This night-time food market is not for the faint hearted! Seahorse dead. Scorpions still wriggling. 😦

Nightime skyscraper view the from the funky Vu Bar in Shanghai

And a close up of the ‘Oriental Pearl’ tower.

A Shanghai street scene with plenty of vendors and tuk-tuks, note the McDonalds top right – our saviour after months of spicy food and rehydrated noodles!

At the airport with bikes and bags packed ready to blast back to Blighty!

On with the adventure; a night in a hotel in Xiewu (room: £8) and we were back on the road. In sunshine we crossed a mountain pass and rode downhill straight into Sichuan province. Unfortunately, on the county border, the road quality went steeply downhill too! After much bumping rattling and swerving of pot holes, we made it to Serchu Dzong, with its imposing monastery complex. Another night, another cheap hotel (no heating, no running water and a drop toilet…again). We cooked breakfast on the windowsill and spent the morning wandering around the massive monastery, poking our heads into the brightly coloured prayer halls and watching the monks scurry around on their daily business. For once there was an equal amount of starring going on, as the crimson cloaked monks seemed just as fascinated by us as we were by them.